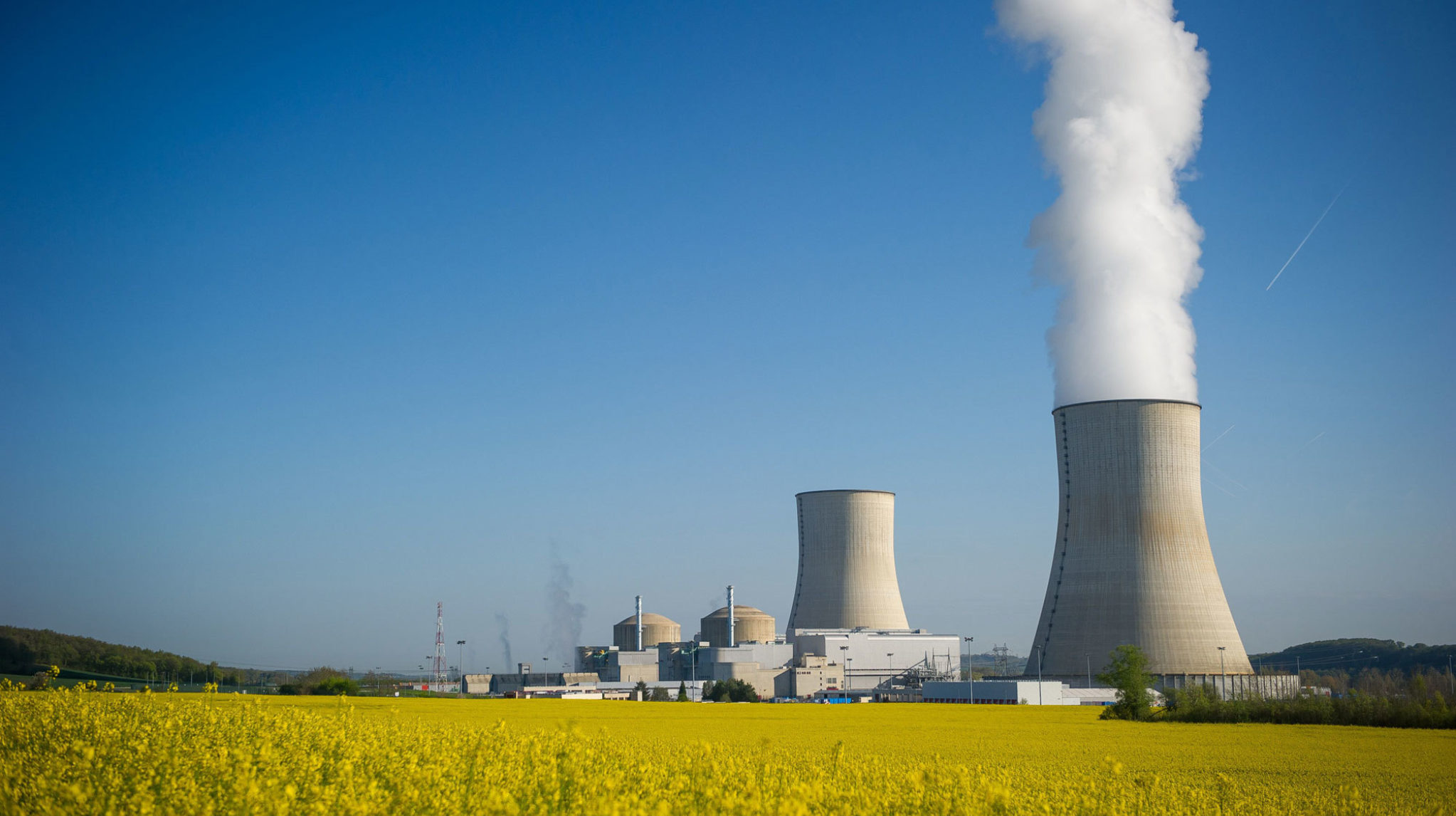 It’s often said that being early is indistinguishable from being wrong and nowhere is this seen more in markets than those trying to predict the next Uranium bull run. Whilst Uranium stocks have definitely received their fair share of love since mid-2020 – with the Global X Uranium ETF (URA) trading ~105% higher – many investors still believe we’re on the precipice of another run similar to that seen between 2005-2007. Investors hoping for history to repeat itself should probably look at the history first and do some work on the complexities behind Uranium pricing.

The explosive Uranium bull market starting in 2005 saw the spot price for the commodity jump 675% by 2007, reaching a peak of ~US$140/lb. This previous run was largely due to the ‘perfectly’ timed 2006 flooding of one of the world’s highest quality uranium mines, Cameco’s Cigar Lake mine in Saskatchewan, that was supposed to start production in 2007. Fear of Uranium shortages lead to frenzied buying and long-term supply contracts, forcing the spot price well beyond record prices, turning small-cap speculative Uranium stocks into cash-cows. Paladin Energy (ASX: PDN) was one of those small-cap stocks that famously rocketed ~18,000% from the start of 2004 to the top of the Uranium market in 2007. As more Uranium producers came online and the supply deficit shrank, the yellowcake market cooled. It wasn’t until the Fukushima nuclear disaster in March of 2011 that set a huge reversal in the supply/demand dynamics and shifted global sentiment on the security of nuclear power, with prices eventually hitting lows of ~US$20/lb in 2016.

Analysis of the uranium market – similar to all commodity markets – can be clearly divided into a supply side and demand side expectations. The market differs to other commodities in being significantly less efficient and constantly prone to shifts in regulation over environmental or security concerns. In 2018, the two biggest miners – Cameco and Kazataprom – cut supply by a combined 20%, in an attempt to gradually lift the spot-price towards an economically feasible US$40-50/lb, the average cost to produce a pound of Uranium. Their combined efforts lead to a supply deficit of 20Mlbs by early 2020. Citing Covid-19 lockdowns, both Cameco and Kazataprom have further reduced output, with the infamous Cigar Lake also coming offline for significant periods of 2020 and 2021. Research from BMO Capital Markets indicates a uranium deficit equal to 18% of current demand by the end of the year.

Whilst most models indicate a recovery in supply post-2021, they also indicate a sustained growth in demand for Uranium through the construction of 54 new reactors expected in coming decades. China has plans for 10 new reactors to sure energy supply for their urbanisation efforts and gradual transition towards net zero emissions, even making note of their move to nuclear power during their 5-year plan earlier this year. The U.S. has also been hinting at delaying the closure of 12 reactors between now and 2030, with the Biden administration considering a greater reliance on nuclear power in their effort to reduce carbon emissions. In a reality where the 12 reactors remain active, Bank of America (BofA) estimates 26Mlbs of unaccounted Uranium will be required to fill the gap over the 9-year period. 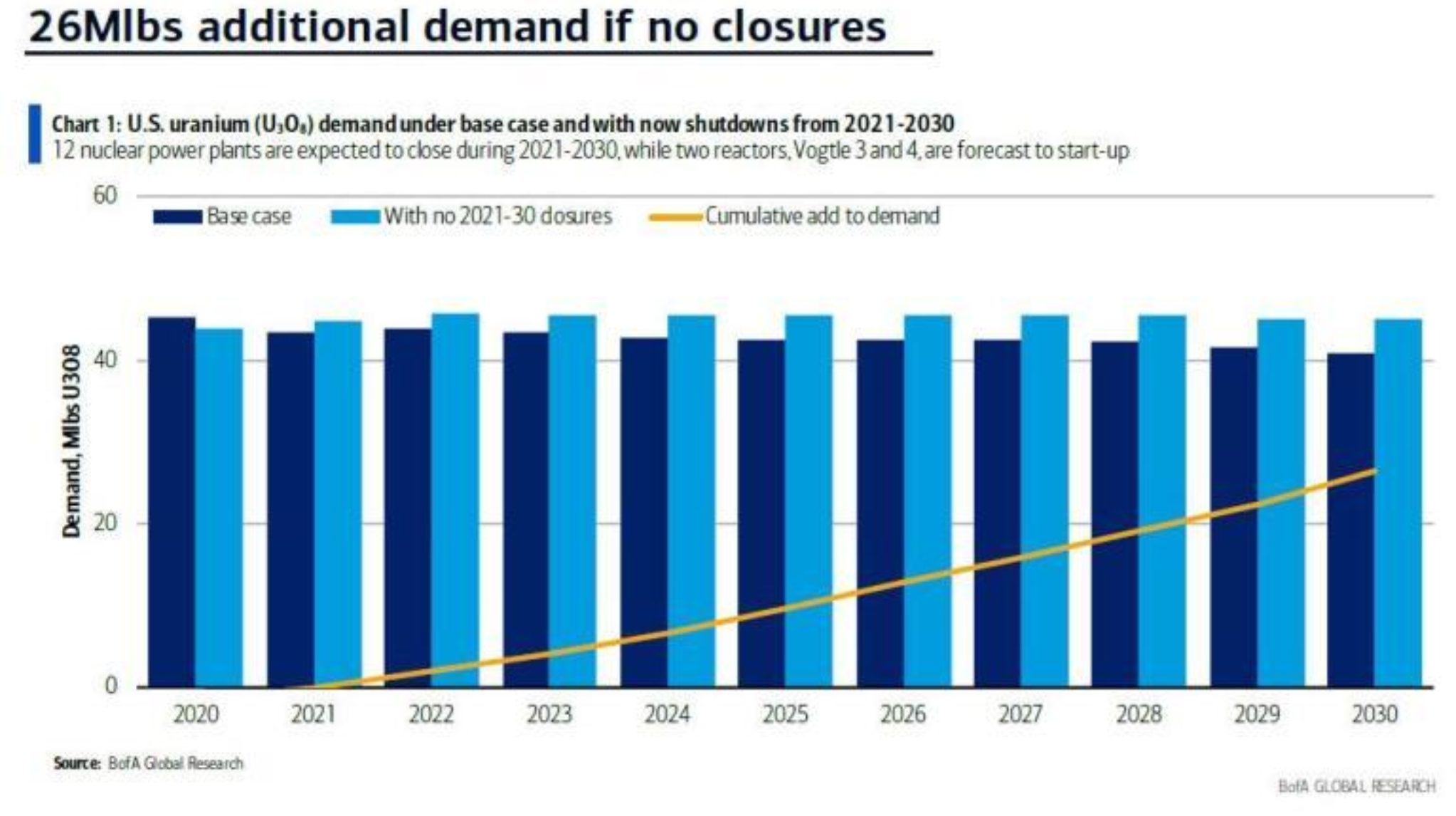 Another point to consider when analysing demand for Uranium is the mechanism used for sale and delivery of the ore. Unlike many other commodities, during times of rising prices, the Uranium spot-price differs greatly from the actual price received, given the use of long-term contracts that aim to lock in supply for a premium. In many ways it becomes a ‘self-fulfilling prophecy,’ as spot-prices rise due to insufficient supply, energy providers are pressured into locking in large off-take agreements, which in turn adds further upward pressure to price of Uranium.

Nuclear fuel production includes three main steps: conversion, enrichment, and fuel assemblies. Russia is the world leader in nuclear fuel production, holding 35% of the market share in the conversion segment and 36% in enrichment. The world’s reliance on Russia for their Uranium conversion or enrichment poses a significant risk to the Uranium market and would likely become a tool used by Russia in the event of future conflict, in a reality where the U.S. further embraced nuclear power.

The U.S. would definitely be considering their overreliance on Russia in the circumstance where nuclear power became a greater part of their energy mix. In 2019, the U.S. was 100% dependent on foreign conversion of their nuclear fuel, with 75% of the enrichment coming from outside the U.S., most of which came from Russia. If the U.S. wanted to maintain somewhat energy independent, investment in nuclear fuel production might make nuclear power uneconomical in the short-to-medium-term.

Investors looking for Uranium exposure should pay close attention to climate change policy globally and capital flow trends associated with ESG investing. As the world transitions to clean energy and governments target net-zero carbon emissions, nuclear energy will need to increase by 650TWh between 2019-2040, dwarfing the 210TWh rise from 2000-2019. Signs that the U.S., the EU, or China are starting to expand their nuclear energy capabilities in-line with future energy requirements will likely be strong catalysts on every Uranium investor’s radar.

It goes without saying, resource focused investors should be closely analysing the price of their respective commodity but given the fact that most Uranium mines are currently in care and maintenance due to low yellowcake prices, interested investors should be paying even closer attention. With the spot-price still well below the average cost of production, even for the most efficient producers, any indication that we will finally see a market with sustainably higher prices will likely lead to the Uranium bull market so many have predicted and gotten wrong in the past.

Lotus recently published a scoping study on the restart of the Kayelekera uranium project, capable of producing 1.4Mtpa of high-grade ore. The study indicated it would require US$50m capex, with an eight-year life of mine (LOM) and a US$40/lb AISC. What makes Lotus particularly attractive is their relatively low market cap of $180m and ability to quickly ramp up production when it becomes economically feasible. It is widely believed that if Uranium prices were to rise above average production costs, there could be a 2-year lag before most mines become operational. Uranium mines that are able to reach production first will be the big winners, having access to the market before supply is able to catch up. Investors interested in potentially taking advantage of a “first-mover” might consider adding Lotus Resources to their watchlist.

Boss is similar to Lotus in having a potential first-mover advantage, whilst likely having the benefit of a lower cost of production, larger resource, and operations located within Australia, all of which you’d pay for in their significantly higher market cap of $420m. Its Honeymoon mine located in South Australia has been in care and maintenance since 2013 and according to their 2020 feasibility study, investors should expect an AISC of US$27.4/lb. In May of 2021, Boss confirmed it has all permits required on a State and Federal level to mine, process, store, transport, and export Uranium for their South Australian mine, confirming their ability to quickly restart production, on $93m of capex. Whilst investors are paying more for Boss – relative to Lotus – their tier-1 location and significantly lower cost of production should help “de-risk” the project and might offer investors additional security in an industry already faced with plenty of risk.