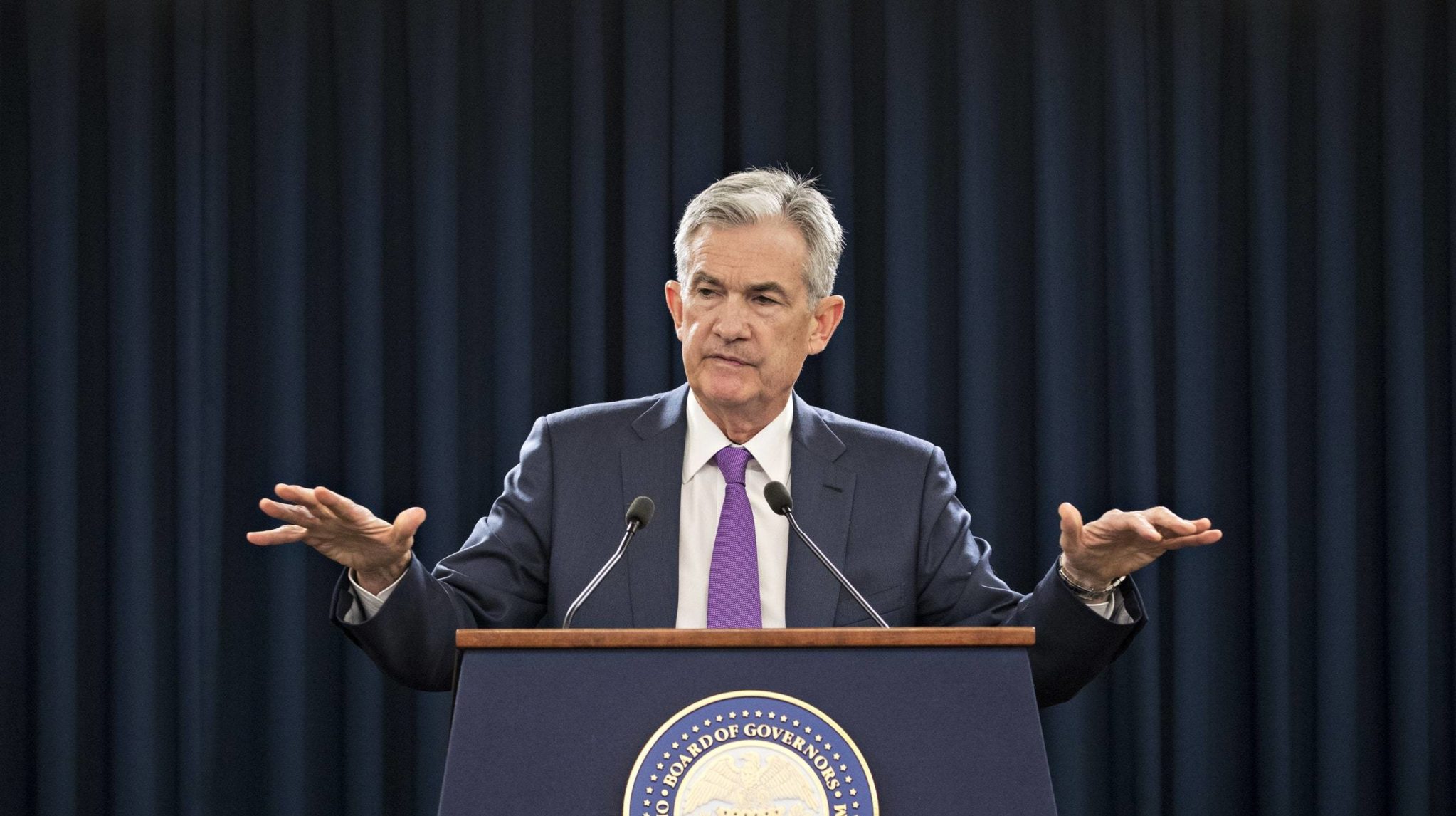 Article
Inflation, The Good, the Bad and the Ugly 28.05.21
CHRIS JUDD Invest

As the world stumbles into its pandemic recovery, economists have been divided into one of two categories: inflationist or deflationist. The inflationist crew believe the response to Covid-19 has created a structural shift, resulting in significant persisting inflation over a longer period, and the deflationists believe inflation will be transitory, as the underlying causes of inflation remain mostly unchanged. U.S. April consumer price inflation hit 4.2% for the year, smashing economists’ consensus and turning all investors’ attention towards rising prices.

Inflation fearing investors might look towards the 5-year breakeven inflation rate, which represents the spread between a nominal and inflation-adjusted treasury security, for insight on the market’s own inflation expectations. The current spread indicates the market is expecting abnormal inflation, with a spread of 2.64%, the highest level since 2008, with no obvious indication of a trend reversal.

If you listen to the Fed and its former chair – now U.S. Treasury Secretary – Janet Yellen, inflation will be temporary and is only a symptom of base effects, very unlikely to persist into 2022. Citing the 2020 COVID-19 lockdowns and pent-up-demand as restrictions are eased, officials claim inflation will likely peak in the short-term, before reverting to the 2% target rate in the medium-term.

The ‘base-effects’ explanation did explain the timing, although heavily discounted the size of inflation, with the Dow Jones consensus expecting a 0.2% month-to-month gain in April and data showing it was significantly higher, growing at the fastest rate since 1982, 0.8%. Inflation will likely only be transitory if the Fed decides to depart from their loosely held dovish policy on no rate hikes until 2024, otherwise inflation might persist longer than most expect. In mid-March, four out of 18 Fed officials were forecasting rate increases in 2022, with majority still expecting no rate changes until 2023 and beyond. Since then, a lot has changed, but the likelihood of the Fed conducting contractionary monetary policy whilst at the same time stressing their full employment target and seeking wage growth, seems increasingly low.

Former top Democrat Presidential adviser and Harvard Economist Larry Summers has criticised Biden and the Fed for excessive spending and “extremely low rates.” Consumer prices have already risen almost as much as the Fed expected for CY2021, with ~ $2 trillion in pent up demand and $3 trillion in fiscal stimulus already out the door. Summers’ concern lies with the “dangerous complacency” in the Fed’s decision to near-guarantee no rate hikes until sometime in 2023/24, a promise he believes will likely come back to haunt Powell and the board. Long-term promises during a time of uncertainty might be useful in calming markets in the short-run, although is likely leading to greater speculation and over-leveraging, with FINRA data showing margin debt reaching an all-time-high. This backs the Fed further into the corner and makes it increasingly more difficult to raise rates if sustained inflation becomes apparent. Any move that indicates the Fed will lift rates sooner than promised will likely spook markets and with signs of excessive leverage, investors should pay close attention to Powell’s words.

The Fed shifting its official inflation targeting policy and greater focus on reaching unemployment targets are both indicators that the Fed might allow inflation to run harder for longer. Since the late 90s, the Fed has been targeting a 2% rate of inflation, becoming their official policy under Ben Bernanke in 2012 and revised by Jay Powell in August 2020 during a talk at the Jackson Hole conference. The new official policy of the Fed is average inflation targeting (AIT) of 2% over the long run, making it less clear what the board will do as inflation hits above their previous target. The ambiguity behind the “long run” raises many questions, with average inflation rate being well below 2% over the past 10-years, theoretically the Fed could allow inflation to run rampant over a longer period and still claim they’re in-line with their 2% average target.

Weaker than expected labour market conditions has now forced Powell and the Fed into a juggling act between maintaining sustainable inflation and achieving the sort of economic growth needed for recovery. Last month’s job numbers fell very short of the mark, adding only about a quarter of the estimated 1 million new jobs expected, resulting in an increase in unemployment to 6.1% and 8.2 million fewer Americans on payroll since pre-pandemic. The higher-than-expected unemployment now means the Fed will likely find it challenging to achieve both sustainable inflation and full employment. There is no doubt the Fed found April’s job data particularly worrying, as they’d hope to have unemployment significantly lower before coming to terms with a potentially ferocious inflation dragon.

Whilst it might seem officials are starting to lose its tightly held grip on the economic recovery, investors shouldn’t assume the Fed is acting irrationally. Inflation could be the golden ticket the U.S. needs to escape potentially crippling interest repayments on their mounting debt, with a current debt/GDP ratio of ~130%, an all-time high. Charlie Munger loves repeating “show me the incentives and I will show you the outcome,” well the Fed’s incentives are clear, and the outcome might very well be to inflate away their growing debt burden. It might seem an outlandish claim to some, but this wouldn’t be the first time the Fed has pulled this out of the playbook. Post-World War II the U.S. faced a similar debt burden to today, with debt/GDP hovering the 120-130% range, before inflation was allowed to run and the burden gradually shrank.

The decade proceeding 1945 saw U.S. public debt shrink 40%, through a combination of high inflation and strong GDP growth. The scenario draws further similarities to today, with GDP growth expected to hit 6.5% in 2021 and federal government spending projected to hit its highest sustained levels since World War II. The Biden Administration is set to propose a $6 trillion budget, with calls for total spending to hit $8.2 trillion by 2031 and $1.3 trillion deficits over the next decade, all of which supports the inflationist perspective that there truly has been a paradigm shift.

Another point to consider is the U.S.’s pseudo-economic war for capital dominance, with China continuing to close the gap. This predicament adds to the inflationists point that the U.S. government will continue to spend big and forego using their interest rate lever for as long as possible. Raising interest rates prematurely to fight off inflation would worsen the U.S.’s position in this struggle for capital, with rate hikes likely wounding an already fragile real economy and reversing last year’s gains in the stock market.

The Fed has plenty of incentives to leave interest rates unchanged in the short-term, and even though some inflation-fearing investors might feel Powell has no choice but to lift rates, it might just be wiser to take him by his word: there are no rate hikes in sight.

The Fed & The Yields

Minutes from the April 27 Federal Open Market Committee (FOMC) suggests that board members were considering tapering their bond buying program “at some point,” if the economy continues to progress towards their targets. Some members thought it was appropriate to begin the discussions in upcoming meetings, although it is important to note the bullish sentiment came before the recent disappointing job numbers and whether this sentiment is still shared in unknown. It is also likely that the FOMC used the minutes to gauge the market’s reaction to slowing the pace of asset purchases, a common practice known as “open mouth operations.” Furthermore, the suggestions of tapering quantitative easing (QE) might be satirical to many, as at the same time, the Fed has ramped up balance sheet expansion.

The current program is to purchase $80 billion in Treasuries and $40 billion in mortgage-backed securities (totalling $120 billion) per month, although has recently shown indications that this is no fixed-rule, purchasing $92.2 billion in the past week alone. The ramp up in bond buying indicates that the Fed is concerned about rising bond yields and has effectively begun an unofficial yield control program, as the central bank’s balance sheet quickly approaches $8 trillion, almost doubling since the start of the Covid-19 pandemic. As inflation expectations rise and investors look at selling bonds, thus lifting yields, the Fed will likely be on the other end, ramping up their bond buying, ensuring yields stay relatively low throughout the expansionary period of the global recovery. 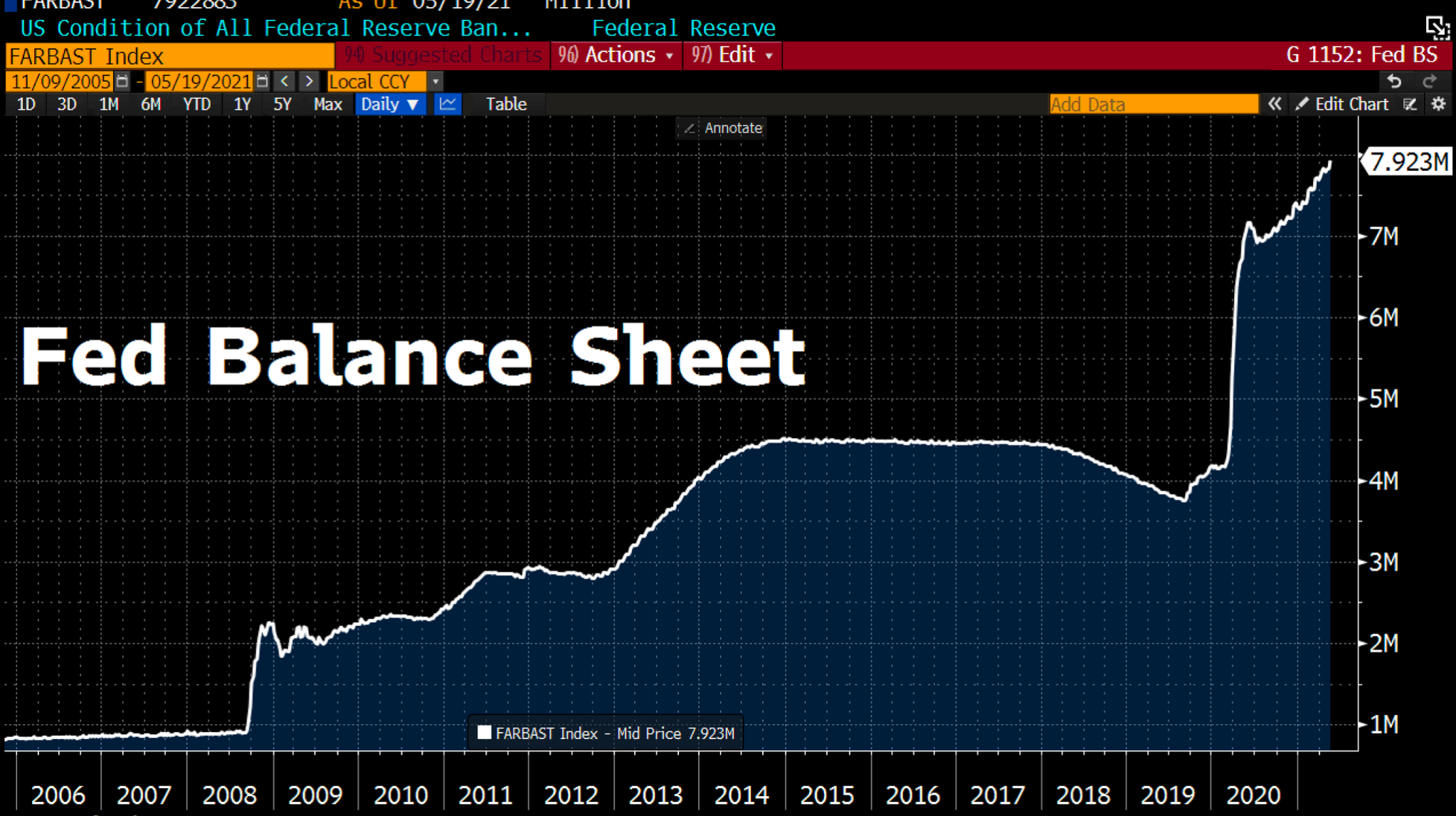